Quiet Termination: What’s Next for HR after Quiet Quitting

The Labor Shortage has Emboldened Workers

With the labor shortage droning on, employees are feeling their oats. They’re sensing their newfound power so they’re pushing back against some long-standing employer practices that have put them at a significant disadvantage.

The latest phenomenon is called “quiet quitting,” and it's making the rounds on social media.

Employees are also pushing back against another phenomenon known as “quiet termination.” More about that in a minute.

The quiet quitting trend started with TikTok user @zkchillin. His brief 17-second video talks about “not going above and beyond” at work. The video has exploded in popularity with millions of views. But more important, it has hatched an essential online conversation about work-life balance, employee-employer relations, personal work ethic, and the “hustle culture.”

The name “quiet quitting” is frankly a lousy name for what it really represents. NBC news produced this segment defining it as “not bending over backward for their employer…and sacrificing their mental and physical health.”

Quiet quitting is not about actually quitting or resigning from  employment. And most people also don’t accept the definition as quiet quitters being on-the-job slackers. As this source defines it “Quiet quitting is the reasonable retreat from the round-the-clock hustle culture.”

Quiet quitting is not about justifying a poor work ethic, but it IS about exercising that executive skill of being able to prioritize your time. It’s about working hard during work hours, and doing what you want during your non-work hours. It’s about setting reasonable boundaries between your employer and your family/personal life.

Many people are itching to co-opt the term to serve their own purposes. They claim quiet quitters are lazy, apathetic slackers. This business consultant claims that quiet quitting involves “declining or not attending meetings; arriving late or leaving early,” and “a reduction in productivity.” In other words, being an on-the-job slacker.

Kevin O’Leary, business owner and star of ABC’s “Shark Tank” spoke out against quiet quitters in a television interview on CNBC, saying it was “the dumbest thing I've ever heard.” He said people will succeed in business only when they “go beyond to try to solve problems for the organization. If you try to define your work ethos by some (time) definition of your job, then you’re going to fail. (Quiet quitters are) people who shut down their laptop at five (and) want that balance in life. (They) want to go to the soccer game. (Work) nine to five only. They don’t work for me. I hope they work for my competitors.”

By implication, O’Leary is saying that someone who consistently shuts down their laptop at five is somehow cheating the company. They’re lazy, selfish, and otherwise undesirable employees. And if you’re NOT willing to work for his company without regard to quitting time, he want’s nothing to do with you.

All employees have an obligation give an employer their full focus, energy and effort during the working hours they are being paid for. However, an employer doesn’t have the right to demand that you work beyond the hours they are willing to pay you. But that’s exactly what O’Leary is arguing for. A good employee to him is one who’s willing to work for some hours for free.

Let’s be clear. I’m not criticizing employees who choose to work late, nor do I disapprove of employers who occasionally require employees to work after hours. I do have an issue with employers who threaten an employee’s job if they don’t work without fair compensation. And I have a real problem with business cultures that frequently shame employees who set reasonable boundaries between their home life and work life.

I base my opinion on research conducted earlier this year looking into what causes stress among HR professionals. One of the elements of the study looks into the effects of habitually working past quitting time.

The study found that, when compared to HR professionals who go home on time, those who habitually stay late are:

Employees are saying “enough is enough.” They’re rejecting the hustle culture fostered by the Kevin O’Leary’s of the world, and his aggressive leadership style that has spurred the quiet quitting phenomenon in the first place.

Employers are not accustomed to having employees push back. Many employers want the unfettered ability to push employees to the breaking point, without regard to an employee’s mental health and long-term productivity. And they especially don’t care if they foster a toxic work culture in order to achieve their company’s objectives.

That’s why so many are talking about quiet quitting. Employees are tired of spending their productive years working in a toxic environment. They’re tired of working for an employer where they’re likely to have frequent emotionally charged confrontations.

I can’t blame them. And according to this Gallup poll, at least 50 percent of the U.S. workforce agrees with me.

From Quiet Quitting to Quiet Termination

I suspect that it won’t be long before the term “quiet quitting” will go the route of many viral social media terms, but the phenomenon itself won’t be going away any time soon. Work-life balance, or whatever we’ll call it in ten years, will always be a priority for workers with children, families, or aging parents. And it behooves employers to help employees maintain this delicate balance.

Quiet quitting is just one way employees are using their collective strength to demand better working conditions. Another practice they’re pushing back against is called quiet termination.

What is “Quiet Termination?” or “Quiet Firing? (Or as my British friends may call it “Quiet Sacking.”)

In a nutshell, quiet termination is when managers use passive-aggressive or subtle tactics to “persuade” an unliked employee to quit, even though they have no justifiable reason to fire them.

To be clear, we’re not talking about terminating an underperforming employee. I’m talking about a company using its collective power and authority to coerce an otherwise productive employee to resign.

As HR professionals, it’s important to be mindful of departments with high turnover. While high turnover itself is not necessarily the fault of the manager, be on the lookout for managers with higher-than-average turnover because they are quietly terminating one or more of their employees.

What would prompt a manager to quietly terminate an employee? 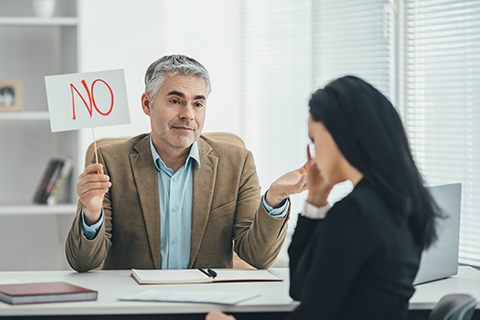 Some want to replace an employee with one that they think will do a better job. Sometimes it’s just a personality conflict, despite the employee being qualified. Other times, it’s discriminatory, such as wanting to replace a higher salaried employee with a younger, lower-paid employee.

With the war on talent raging on, employers are often faced with the necessity of promoting less qualified employees to management positions. This can result in new managers quietly terminating an employee because they lack the skills or motivation to lead, advise, or coach these employees.

It's not always easy to spot quiet terminations, but be on the lookout for managers who single out an unliked employee with behaviors such as:


Why Quiet Termination is Bad for Business

What’s so toxic about “quiet termination?”

From a company standpoint, it’s bad for business, especially if the employee is qualified. Think about all your company had to invest in getting that employee trained in the first place. Is it wise to throw away your investment in that employee simply because of a personality conflict with the manager?

From a personnel perspective, quiet termination doesn’t happen in a vacuum, and other employees are sure to notice, then wonder if they’re going to be next. That negative impact on productivity always comes at a cost in terms of lower employee engagement, morale, teamwork, and productivity. It can also embolden whistleblowers to speak out against your company.

Let’s also talk about the damaging impact on your company’s reputation. If your managers have a reputation for being jerks, Glassdoor and other job sites will make darn sure the word gets around.

In some cases, quiet termination not only leads to losing a good employee, but it can also lead to ongoing legal issues, especially if the manager’s behavior rises to the level of a “constructive discharge.”

“Constructive discharge” is a legal term describing an employer’s unlawful termination of an employee, where working conditions were permitted to become so unbearable that it forces an employee to voluntarily quit.

The requirements of a constructive discharge differ from state to state, but in a general sense, the employer’s actions must reach the level of hostility that is viewed as unbearable by an unbiased individual. Constructive discharge also is usually tied to some form of unlawful discrimination, thereby creating an intolerable working condition that forces the employee to resign.

Admittedly, the legal standard for an ex-employee to prove a constructive discharge case can be difficult. One of the biggest challenges they have is gathering proof, especially after they’ve left the company. But some employees have been successful in their claims by seeking legal counsel while they’re still employed. In such cases, they were advised on how to obtain the necessary proof they would need to convince a court “that the work environment was so intolerable that any reasonable individual would have resigned given the circumstances.” From an HR perspective, your life will be better if you don’t have to defend a constructive discharge claim.

In our next article, we’ve asked HR professional Lisa Oyler to talk about the 15 most common types of poor management behaviors to look out for. From micro-managers to bullies…how well are you and your HR team identifying bad (or unproductive) behaviors among your managers? If you'd like to be notified when that article is published, enter your email address in the "blog sign up" box in the upper right-hand corner of this page.

What’s your take on this?

I’d love to hear your opinion.

What do you think about the quiet quitting phenomenon? Do you agree or disagree with my definition?

Have you ever dealt with a manager who has quietly terminated an employee? If so, what did you do about it?

Are your employees emboldened to push back against any other practices at your company/organization?

I invite you to leave your comments below.