How to Win Over Gig Workers and Why it Matters

Raise your hand if you’ve done any of the following in the last year:

If you’ve enjoyed any of these conveniences, you have a gig worker to thank for it. And if you’re like most people, you’re becoming more and more comfortable with outsourcing vital tasks.

The gig economy has been on the rise for many years, ingraining itself into everyday life. The same is true for more and more businesses – with the pandemic, and the subsequent great resignation, spurring the transition to happen even faster.

Gig workers are changing how consumers do business as well as how employers do people.

Not only are technological breakthroughs happening one on top of the other, the pandemic forced mass adoption of workplace changes that might have otherwise taken years. The number of workers choosing to work as independent contractors is on the rise.

Savvy businesses that are willing to embrace these changes are poised to benefit. The trick is to attract the best talent and then foster lasting relationships with them. That probably sounds pretty familiar to HR professionals, since it’s the same goal for every type of employee.

Why are People Choosing to Freelance?

Nearly 57 million U.S. workers freelanced in 2021. While this is approximately the same number as the previous year, a remarkable change happened in the type of workers who chose freelancing. There was a decline in the number of unskilled temp workers, and at the same time remote, skilled freelancing done by highly educated workers is on the rise. In fact, 53% of all freelancers provided skilled services, like computer programming, marketing, IT, business consulting, etc.

Experts are predicting this trend to continue, reaching 90 million gig workers by 2028 (compared to 57 million in 2021). That will be more than half of the entire U.S. workforce. It makes sense when you consider that 91% of freelancers are optimistic about the future of freelancing, and 56% of non-freelancers saying they are likely to freelance in the future.

Another change of note is that more and more workers from the older Gen X and Baby Boomer generations are testing out the freelance waters. In previous years, gig work was mostly the domain of tech-savvy Millennial and Gen Z workers.

Finally, the pandemic forced layoffs and remote work situations at many offices – and we’re seeing many people in no hurry to return to a traditional work arrangement. In short, they like the flexibility and work-life balance they’ve found in gig work.

What does gig work look like? Some people run one or more side hustles to supplement the income from their full-time job while others live solely off the money they make from their “gigs.” Contracted work is the primary source of income for over 17 million U.S. workers.

What is the Freelancing Revolution Doing for Employers?

On one hand, it's opening doors to top-tier talent, saving employers money. On the other hand, it's also complicating things for HR.

Let’s start with the advantages.

One survey reported that 70% of small and medium sized businesses have used gig workers at least once to access skills and experience that is not available in their current workforce. And it’s not just smaller companies, but big ones too. Around 30% of Fortune 500 companies report they use freelance websites to outsource some of their tasks.

Thanks to the internet and other tech advances, many employees don’t need to be on-site full-time in order to carry out their job duties. That means organizations are no longer limited to the talent pool in their geographical area or candidates looking for full-time employment. This is a big deal amidst a great resignation making the job market more competitive than ever.

Companies also tend to save on corporate expenses when they hire out for various projects. A report from a consulting firm revealed that, approximately 43% of companies who use contracted workers save 20% or more on labor costs. This is largely because they don’t have to pay for benefits like health insurance, PTO and retirement savings. Plus, the work is completed (and paid for) on demand. Since tasks are typically billed with a flat fee per project versus as an hourly wage, it is easier to plan for expenses and predict what the ROI will be on those projects.

Now for the complicated part. (Or is it?)

Because of regulations regarding the relationship between employers and their contracted workers, gig workers don’t legally fit in the same bucket with traditional full-time employees. They’re paid differently, have more control over the work they do and how they do it, and can’t receive all of the same benefits organizations commonly provide to their employees.

However, at the end of the day, working with the two worker types is not as dissimilar as it initially sounds, according to Lisa Oyler, the HR Director here at Access Perks. “Gig worker” is no longer synonymous with “temp.” Most freelancers aren’t hopping from task to random task, they’re looking for long-lasting client relationships. On the other end, employers return again and again to gig workers that they trust to deliver timely results that fit the company standards.

“Whether we’re talking about a full-time employee or a contracted worker, the ‘human’ part of the relationship is the same,” said Oyler. “Freelancers want to belong. They want to feel valued and appreciated just like full-time employees. It’s up to me to see that our company builds relationships with our contracted workers so we don’t have to go looking for a new one each time we need a job done.”

How Organizations Can Build Strong Relationships with Freelancers

As the gig economy increases its share of the labor force, organizations would do well to recognize the value in strengthening the connection with their contracted workers.

So how do we do that? Start with what matters to them. One 2018 survey found that 4 of the top 5 concerns for Freelancers and Non-freelancers were the same. (see chart below) 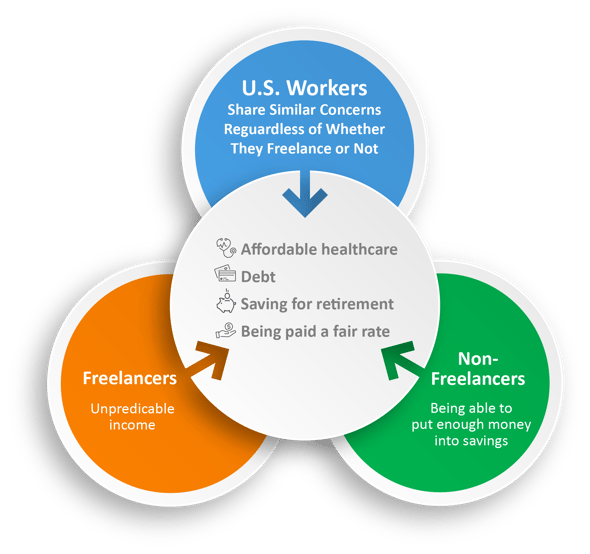 Given their similar needs, contract workers would clearly value the kinds of benefits that full-time workers do – especially those that help them solve problems like saving money, healthy living and financial security.

And yet, employers’ hands are legally tied in many ways when it comes to offering a full suite of traditional benefits to gig workers. That’s where a number of select employee perks can come into play, particularly for employers that want to build better relationships with non-traditional workers.

So while some traditional benefits are out of the question, there are several perks that can be extended their way.

Here are some options:

These and other perks that allow freelancers to experience the corporate culture send a clear message that “though the paperwork you filled out upon ‘hire’ differs from traditional employees, the work you’re doing matters and we value you.”

Cultivating a healthy contractor/contractee relationship can reap rewards for organizations willing to invest a little in their gig workers. With everything from photography, videography and blogging all the way to sales, programming and customer service being outsourced, these workers play far too critical of a role in business success to overlook.

For additional insights on fostering a relationship with contracted employees read: How To Help Your Remote Employees Feel Part of the Team.

For over a decade, Kendra Lusty has been a writer for Access Development, and currently focuses her research and writing on topics related to loyalty and engagement.